3 Cycles of the U.S Truckload Market

Learn how freight markets move up and down 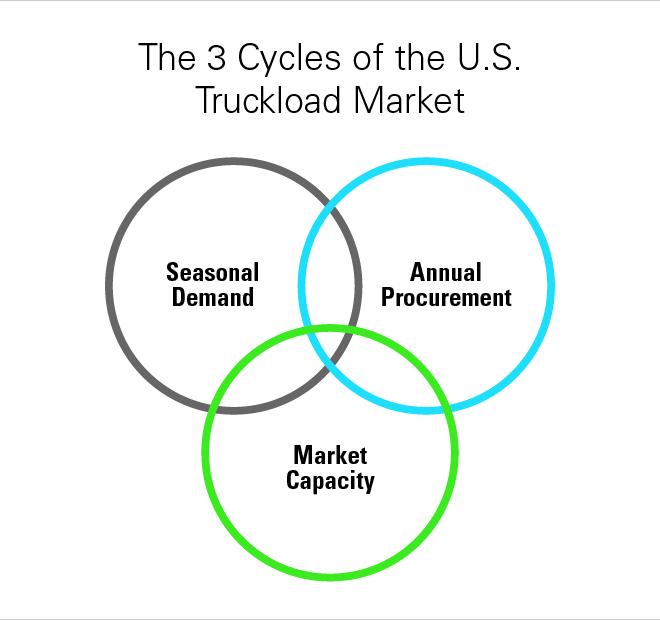 To add to the confusion of a massive, fragmented U.S. Truckload market, there are three separate cycles operating simultaneously.

Two of them — the annual procurement and seasonal demand cycles — are well documented, easy to observe and relatively consistent.

The third cycle, the ‘elusive’ market capacity cycle, is harder to detect, but the key to understanding and properly navigating the market.

The first cycle refers to the fluctuating pockets of seasonal demand that occur with at least some level of regularity.

Many products and commodities do not follow steady shipping schedules throughout the year, instead surging over a relatively short period of time — generally a few weeks or months — in response to planned production or demand windows.

Examples include produce season, holidays, peak retail season, Christmas trees in the winter and barbecue products in the summer.

Trucks migrate to capitalize on the demand surge for as long as it lasts, then disperse across other market geographies once it’s over.

The seasonal demand cycle is perhaps the most stable cycle within the industry. Supply chains are designed to cope with these planned demand surges, and trucks are, in many ways, the ultimate form of mobile production.

With a prepared shipper base and a mobile carrier base, the market usually absorbs these seasonal fluctuations without major disruptions.

A notable corollary to seasonal demand is catastrophic weather events. These have a similar — though unanticipated — effect, creating relatively short-term, sometimes profound, disruptions in both supply and demand.

Recent examples include 2017 hurricanes Harvey and Irma that battered the southeastern U.S. in rapid succession, causing unprecedented flooding in Houston, Texas and massive damage throughout the region.

The market’s ability to efficiently absorb these types of shocks is heavily dependent on the status of the third cycle.

Generally speaking, the industry consensus seems to be that freight rates will rise year after year. Assuming this, most high-volume shippers take their forecasted network out to bid in an effort to set annual ‘contract’ rates.

These contract rates are intended to hedge against spot market exposure, mitigate volatility and reduce financial risk. Most shippers confirm bid awards in Q4 and activate them in Q1 of the following year.

At a glance, it’s easy to assume that an annual procurement cycle would create consistency across the industry.

However, the shifting market dynamics shaped by three simultaneous cycles, combined with conflicting economic indicators and posturing from both sides for higher and lower rates, dampen any stabilizing effect.

Ultimately, the true success or failure of any shipper’s procurement strategy is at the mercy of the elusive third cycle, the one cycle to rule them all: the market capacity cycle.

As heard from shippers in an inflationary market:

These are common concerns for shippers during the inflationary leg of the capacity cycle. Why? Because freight budgets were set during a period of deflation.

Shippers anticipated a future rate environment that never materialized and now their freight budgets and service metrics are paying the price (literally).

As heard from carriers in a deflationary market:

These are common concerns for carriers during the deflationary leg of the capacity cycle. Why? Because truck orders were made during a period of inflation.

Carriers anticipated a future rate environment that never materialized and now their fleet is paying the price.

As previously mentioned, the U.S. truckload market is massive and fragmented; no one participant can dictate terms and barriers to entry and exit are very low.

This creates fluctuating market pricing that floats on top of the ever-shifting balance of supply and demand. Those two forces are rarely in a state of equilibrium, and when they are, that period is brief.

When the market is attractive to carriers, current companies will order more trucks and prospective carriers will seek to enter. This process isn’t instantaneous.

At some future date (usually several months or quarters due to truck build cycles, order backlogs, driver recruitment and training, etc.) that additional capacity will enter the market.

As is often the case, the future market ends up being much different than the conditions that led carriers to make those business decisions in the first place. Trucking companies can overshoot, adding excess capacity which causes supply to exceed demand.

To put it another way, carriers bought high, now they have to sell low.

Tender acceptance begins to rise while rates begin to fall. Shippers press their advantage, driving rates as low as possible to cut costs after a couple years of blown budgets.

As rates start bottoming out, carriers pull capacity back out of the market, setting up the next inflationary leg, and so the cycle repeats.